Somewhere in Japan, Dispatch № 98: Ode to the Kotatsu

The strength should be carefully set
Too high, an uncomfortable bet
It’s radiant heat
And could cook you like meat
Or at least get you soaking with sweat

But a favorite for me they remain
For the easing of wintery pain
If the song of the season’s
A cold one, I’ve reason
To sing my kotatsu refrain

Let’s talk about the kotatsu1, in case you are unfamiliar. It is a common sort of low table found in homes in Japan, often in tatami2 rooms. During the warmer months, it’s just a low table. On the underside, however, it has an electric heater, and during colder weather, one adds to the table something like a heavy blanket that forms a sort of skirt around the perimeter of the table. 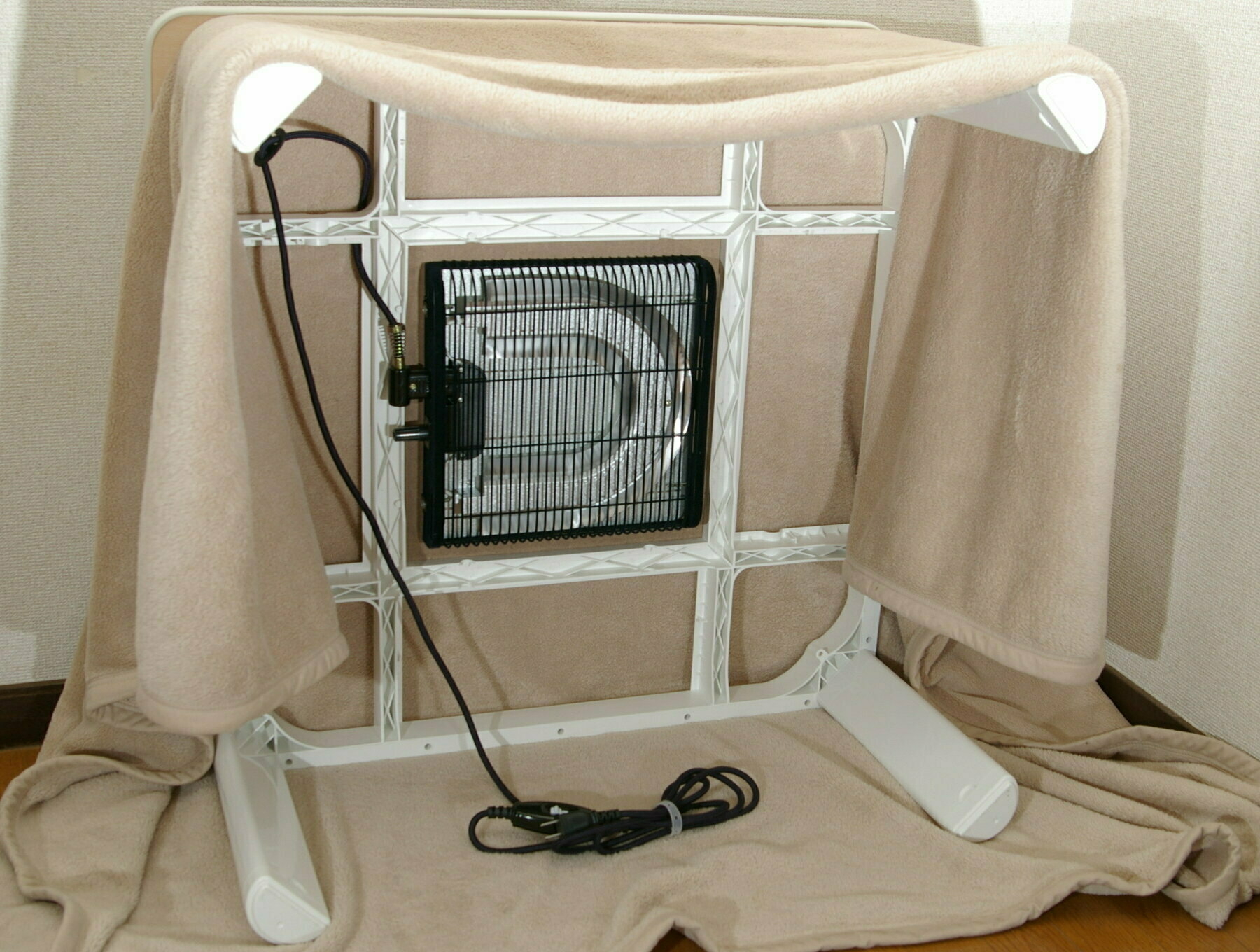 Image of kotatsu heater by Hustvedt on Wikimedia Commons, used under CC license

Switch it on, put your legs (or whole self sometimes, if we’re being honest) underneath, and enjoy what is just about the coziest thing you can experience at home.

Though they could be a comfortable addition to many western homes as well, their popularity in Japan comes from the fact that Japanese homes in much of the country are notoriously badly insulated, perhaps not insulated at all. It’s getting better bit by bit, as people and homebuilders catch on to the fact that insulation is actually a great thing to have, but if you live in Japan, there’s still a very good chance that your home is very cold in the winter months.

Which is exactly the case with my apartment. We have a heater, but keeping the apartment warm all the time is economically unviable given how poorly insulated the place is, so the kotatsu is a very functional piece of furniture. It is also extremely pleasant, especially when paired with a hanten3 or heavy sweatshirt.

Besides being functional, the kotatsu has substantial cultural cachet in Japan and is a common seasonal reference point. My favorite example is probably Kotatsu Neko, a giant ghost cat from the manga and animated series Urusei Yatsura who loves to sit at the kotatsu (pictured below).

Though in the long run my partner and I intend to renovate an old house and fully insulate it, even if our home is someday toasty warm in the winter, we’ll still have a kotatsu. It’s just too nice a thing in the home to pass up on in the winter.

Somewhere in Japan’s main home on the web is at somewherein.jp, where you can also sign up to receive these posts by email.

And if you like what I’m doing, please consider directly supporting this project for as little as $3/mo on Patreon. The upcoming podcast version of Somewhere in Japan will be available to patrons before the general public, too. Click here to learn more.